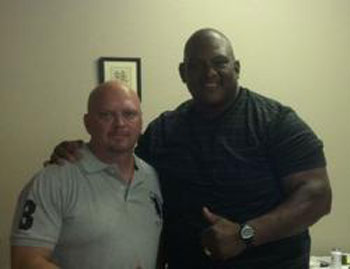 Derek Kennard, NFL Legend will be heading to his hometown to help spread awareness on the deadly disorder, obstructive sleep apnea (OSA). He will be taking stage with Mike Haynes and Lincoln Kennedy, amongst many other retired NFL Superstars. Kennard and the other players have been loyal and outspoken advocates of spreading awareness of the deadly disorder across the country. Joined with David Gergen, owner of Gergen’s Orthodontic Lab and co-founder of Pro Player’s Health Alliance (PPHA), they have been on a mission to “Tackle Sleep Apnea” nationally.

The most recent and successful event was held on January 10, 2013 at 7:00pm at The Scottsdale Plaza Resort, 7200 N. Scottsdale Rd, Scottsdale, Arizona 85253. It was a huge success drawing in almost 450 people. These events are becoming quite the buzz in the sleep apnea community. These free public events are being held to raise awareness of sleep apnea and snoring, by discussing the dangers associated with the deadly disorder. At this last event, former NFL superstars and speakers include Hall of Famer Lincoln Kennedy, All Pro, at one time the fastest man in the NFL, Roy Green, All Pro and legendary Seahawks Quarterback Dave Krieg, All Pro HB Ron Wolfley, All Pro and Super Bowl superstar Derek Kennard, and Mark Walczak of the Arizona Cardinals. Industry leader Gergen’s Orthodontic Lab, one of only a few labs in the country that is approved by Medicare for oral appliances along with Sleep Group Solutions, provided home sleep tests. Dr. Allan Bernstien and Dr. Rodger Briggs hosted the Pro Player Health Alliance event and were thrilled with outcome of the event.

This event and the events that will follow is co-sponsored by Gergen’s Orthodontic Lab who will provide FREE oral appliances to qualified attendees. The goal of the event and national campaign is to generate as much awareness about sleep apnea and encourage attendees to get tested and diagnosed.

“I believe by spreading awareness we can save lives,” says Gergen “We have gone above and beyond for this event and have been able to reach out and get organizations such as the American Legion, the Veterans of Foreign Wars (VFW), The Phoenix Elks Club, and the Greater Phoenix Swing Dance Club to be a part of it,” says Gergen.

The next event will be held in San Jose, CA on February 7, 2013 and hosted by Victor D. Woodlief, DMD.

For more information about PPHA or the “Tackle Sleep Apnea” campaign, visit http://proplayersleep.org.
To register for the next event on February 7, 2013, visit http://www.eventbrite.com/event/4661298068?ref=ecount.